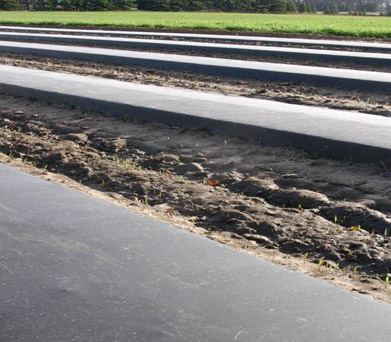 The 1.5 mil is  thicker and gives you added protection when laying plastic on poor soil conditions.  It's also common for double cropping or longer crops such as strawberries.

Embossed Plastic Mulch resists tearing, flapping in the wind and expanding on sunny days.   This is high quality plastic that is easier to remove, hugs the beds and can be laid down at higher speeds.

What is Embossed Plastic Mulch?

Embossed plastic has visible diamond patterns on the surface, which give the plastic a wrinkled appearance. This mulch is generally more resistant to damage due to punctures, wind fatigue and cracking than non-embossed mulches.  The 'diamonds' are extra protection and make the plastic stronger.  Slick Plastic will generally not hold up as well.

Most common agricultural mulches include black, white and white on black, which may be used with either side facing upward, depending on the specific need. Clear mulch is used when most rapid soil warming is needed, but weeds will grow below it, thereby limiting its usefulness. White mulch reflects solar radiation and is used where soil cooling is desired, such as establishing fall crops during the heat of summer. Research has shown that white or aluminum reflective mulch also repels aphids, which spread some virus diseases in vine crops such as squash. Various other colors of mulch may affect plant growth in a positive way.

There have been no reviews for this product.